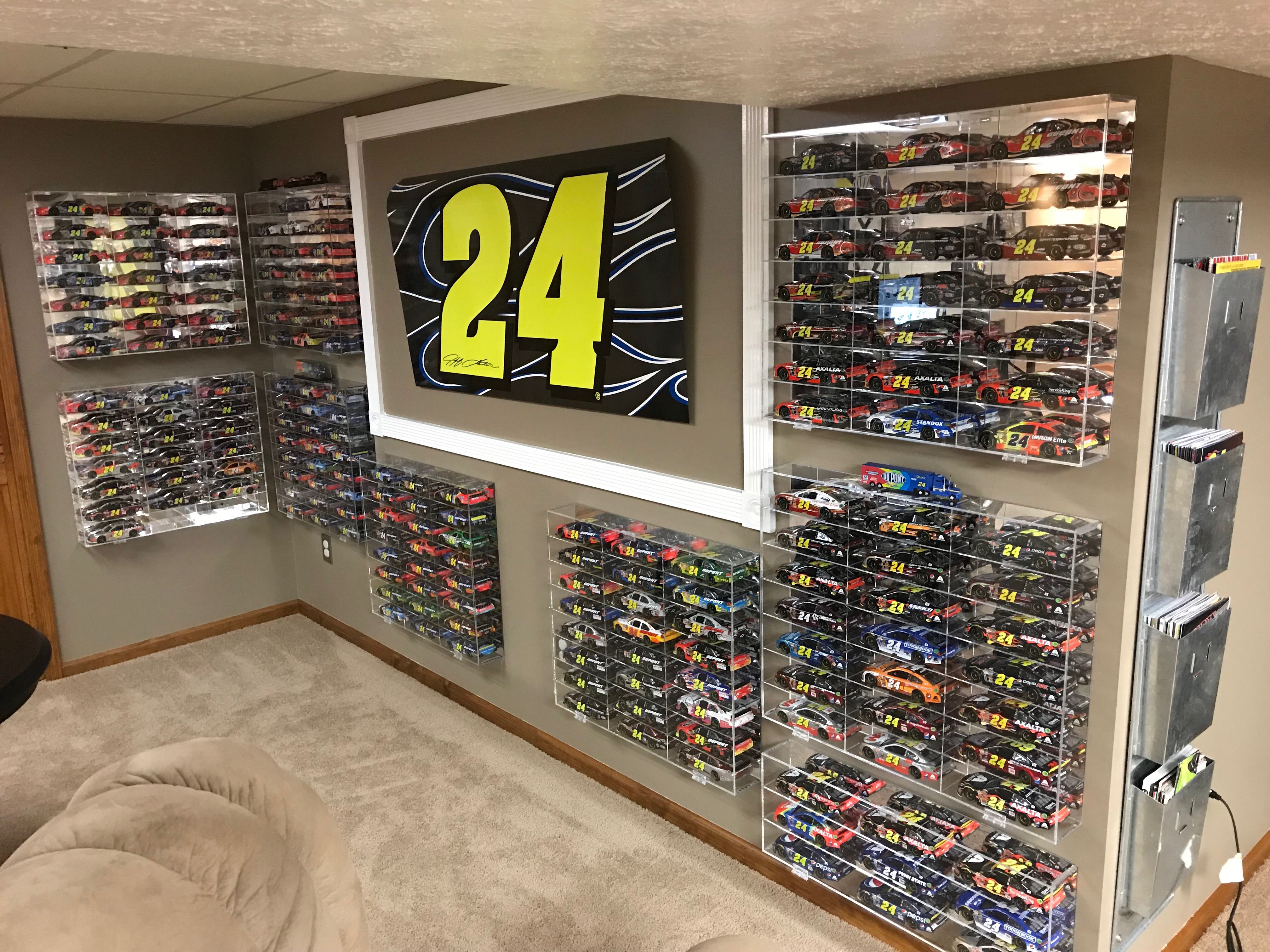 Like most sports, NASCAR has its way to connect families and friends together given its unique dynamics. Given the grind of a 38-week long season for the sport’s premier series, fans and participants of NASCAR become relatives by association.

Josh Chavayda’s passion for NASCAR all started in the mid 1990’s, a time when the sport experienced a popularity boom. Like most new fans during this period, Jeff Gordon was the poster boy for ushering in a fresh wave of racing enthusiasts in a unique sport.

For Chavayda, his choice of driver was catalyzed by his grandmother. Following the 1994 running of the Coca-Cola 600 at Charlotte Motor Speedway, he was gifted with a Jeff Gordon t-shirt.  About three years after the 600, he collected his first die-cast car, which was Gordon’s DuPont ride from that season.

It’s safe to say that Chavayda is not a bandwagon fan.  In some ways, the sport is a reminder of the wonderful memories of his late grandmother, a sentiment that’s relating to most collectors. Furthermore, it’s a hobby that helps immortalize the wonderful moments celebrating the stars of this 70-year-old stock car series.

Chavayda, who resides in Ohio, is a genuinely passionate race fan who’s had the fortune of meeting his favorite racer in unique fashion. To say the least, his collection is like a mini showroom of stock cars from the 1990s to the present, something that could be the envy of other collectors!

Recently, Chavayda took the time to talk about his initiation into NASCAR and about his die-cast collecting. Let’s get to it by getting into the “Collector’s Corner with Josh Chavayda,” exclusively on Lionel Garage!

Rob Tiongson:  Talk a bit about how you became a racing fan and when you first started collecting die-cast cars, especially Lionel’s NASCAR offerings.

Josh Chavayda:  I was seven to be exact.  My grandparents were ticket holders at Charlotte Motor Speedway. They would go to the Coke 600 every year, and every time they would go, my grandma would pick out a driver shirt for me and all my cousins. Most of the time, it was a Dale Earnhardt shirt since he was their favorite driver.

So, one year they go to the Coke 600, it was 1994, and Jeff Gordon gets his first win. When my grandparents returned home from the races, my grandma hands me a Jeff Gordon T-shirt and says I got this one for you because this kid’s going to be good.

I caught the die-cast bug when I attended my first race. It was the 1997 UAW-GM 500 at Charlotte. Dale Jarrett won I believe and it’s when I first noticed that they sold small replica die-casts of the race cars. I noticed all the individual sellers outside the track and the team trailers selling all the merchandise and the die-casts just caught my eye.

My very first die-cast was Jeff Gordon’s standard 1997 DuPont paint scheme. From there on, I was hooked. Every race I would go to, I would pick up a car or two. Then, I joined RCCA and got the catalogs every month and would bug my mom (I was still very young at the time) to order me a car during Thursday Thunder. Then, I would ask for certain cars for my birthday or Christmas.

Before I knew it, I had a pretty good collection. There was a time where I had to take a break from collecting for personal reasons. Within the last 10 years, I’ve really built up my collection through RCCA. I’m always looking to build on my collection, as I really enjoy opening a new die-cast when it arrives. The details on these cars today are just phenomenal and Lionel does such a great job.

RT:  At last count, about how many cars do you have in your collection and what’s perhaps the oldest car that you still have to this day?

JC:  I would venture to say I have roughly 450 1:24 scale die-cast and I have about the same amount in 1:64 die-cast as well. The oldest car I have is a 1995 Jeff Gordon DuPont. I believe that was the first year for the Action die cast cars.

RT:  When it comes to collecting die-cast cars, are you a selective collector in wanting a specific team or driver’s cars, past or present, or someone who likes to complete their collection?

JC:  Yes, I am selective in who and what types of cars I collect. When Jeff Gordon was still racing, I would only collect his cars. My goal was to have every standard finish car that they had made available and I’ve been able to mostly complete that. I’m missing a few very hard to find employee exclusives. I would go after the Elites when I could but was fine with the ARC as well.  I would also collect Dale Sr. and Dale Jr. die-casts and would pick up a random driver here and there. Today, now that Gordon has retired, I mainly go after the raced win versions of certain drivers, or a car of a driver who I think might become a rare collector’s item. I’m after the unique stuff nowadays.

RT:  Lionel offers a variety of die-cast cars, from the standard paint scheme in 1:24 and 1:64 scale, to various color schemes and even autographed replicas.  What’s some of the qualities that you enjoy with the different cars with Lionel’s product line with Action Racing Collectables or the Elite series?

JC:  My absolute favorite die-cast are my liquid color finishes. Lionel does such a great job with these finishes. These cars look more like the cars on the track and just look amazing. I am also a fan of some of the color chrome and brushed metal/raw finishes.

I’ve really enjoyed recently RCCA offering exclusive autographed die-cast. Those have been some of my favorites to collect the past couple years. I think this makes them unique and will hold their value in the collectors’ market. The Raced Versions are also at the top of my list, as the detail on those types of die-cast are just mind-blowing. Lionel never disappoints on the raced version cars.

RT:  You’ve had some unique experiences as a race fan which I understand includes meeting Jeff Gordon.  How was it like to meet one of your favorite racers and did you get one of your Lionel cars autographed by Gordon?

JC:  This was one of the most memorable moments I’ve ever had. Once I found out Jeff was retiring, I knew I had to find a way to meet him.  I signed up through his fan club to do the Jeff Gordon VIP meet and greet and I was able to get a spot at the first Michigan race in June of ‘15.

The whole experience was better than I thought it would be. Getting to walk through the garage area and get right up next to his car was just awesome. Then to go to the motor lot and go to his motor coach and see him in person was just crazy because I was star struck.

He came up and shook everyone’s hand and thanked us for coming. It was a great experience and Jeff was so nice and answered everyone’s questions. He was so down to earth and humble. I debated for weeks what car I was going to take with me to have him sign. I had it narrowed down to a couple. I decided on his 2014 Brickyard win raced version. It was an eEite color chrome and it was DIN #1. I have that die-cast along with a picture of Jeff and in a special case.

RT:  What’s perhaps your most sentimental piece in your collection and how did you acquire this car or memorabilia?

JC:  Of all the cars I have, my most cherished is a 1:32 scale Jeff Gordon. It’s a 1998 Chromalusion car that he ran in the All-Star Race that year. It was one of the very first die-cast my grandma bought for me, the same grandma that got me the Gordon t-shirt. She passed away a number of years ago, so that car has a lot of sentimental value to me.

RT:  While Jeff Gordon stepped away from full-time NASCAR competition, do you sometimes search for some of his older cars with a Lionel dealer or on various places like eBay?

JC:  I’m always looking for some of his older special finish cars, and I am always on the hunt for the rare employee exclusives. I do most of my searches on eBay or on the Lionel Forum.

RT:  NASCAR is known for its reputation as being a sport geared for time with family and friends.  When a relative or friend sees your collection, or attends a race with you, how special is it for you to share that experience or tell a story about a race with them?

JC:  I am very proud of my collection so when I can get the chance to share it with a new friend or relative, I enjoy seeing their reaction. Not everyone I know is a NASCAR fan, but when they see my collection, they can certainly appreciate it. Most anyone I show is just shocked at how many cars that I have, and their first question is, “How much money do you have wrapped up into all this?”

My response is always, “I don’t want to know.” It’s been quite some time since I’ve been to a race, but I am going this year to the Homestead finale thanks to the RCCA event. In the future, I look forward to taking my son to a race and hopefully get him hooked at a young age like I was.