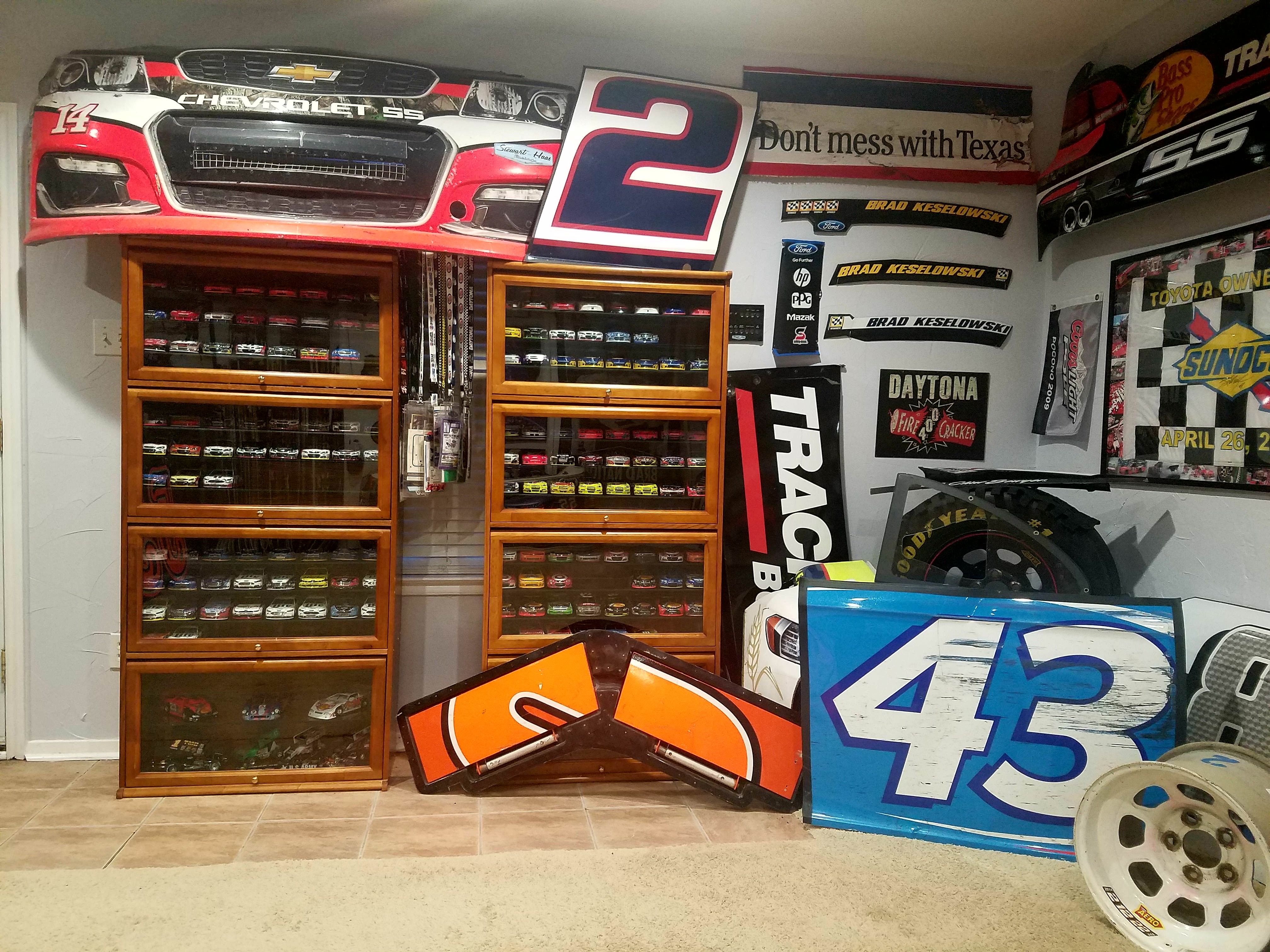 No matter where NASCAR and die-cast fans reside, it seems like family is the catalyst for that enthusiast’s passion for the sport and hobby.  After all, it could be a seemingly routine drive to the toy store, or a family trip to the racetrack that makes for an everlasting impression.

Certainly, Larry Newbrough is a race fan unlike most in die-cast collecting circles.  In fact, he’s what some may call the ultimate, total NASCAR fanatic.  While he may have a favorite driver in mind, a quick glance at his collection of sheet metal and Lionel produced die-cast cars is truly the envy of many members of NASCAR nation.

Newbrough’s passion for NASCAR started in 1997 in a race that was recently immortalized by Lionel Racing.  Suffice it to say, Larry and his brother Nick were hooked for life, an intangible bond that most can relate to in the racing world.

Furthering Newbrough’s case as the ultimate NASCAR fan is his organized collection of Lionel produced die-cast cars.  Like bookworms whose precious prints are listed in alphabetical order by author or title, Newbrough’s cars are positioned in a way that he’s like a die-cast shop foreman.

Knowledgeable, enthusiastic, considerate, and candid, Newbrough understands the ins and outs of the die-cast world.  Surely, the fact that he does not take any offerings from Lionel for granted is an understatement.

From this new Texan to this Lionel collector hailing from Euless, TX, let’s learn more about this all-star die-cast fan.  Race fans, it’s time to delve into this latest edition of “Collector’s Corner with Larry Newbrough!”

Rob Tiongson :  Your NASCAR collection looks like a race shop adorned with sheet metal and die-cast cars. How did you become a fan of NASCAR?

Larry Newbrough :  My father introduced me to the sport. I remembered that we would watch the Daytona 500 every year. It was the 1997 Daytona 500 when I remember the hook really being set and I began to follow the sport much more closely.

It was around the same time my older brother really got into the sport as well. It has been something we have both now grown up following and sharing a great passion for.

RT :  Every fan has their story with how they started their die-cast collection.  When did you purchase your first die-cast car and which car was the first to be featured in your house?

LN :  The first die-cast I purchased would have had to have been back in the mid to late 90s. However, at that time, I was only 10 or 12 years old so they weren’t really being bought with the thought of collecting. They were still just toys.

I would have to say the first die-cast that was bought with the intention of collecting and displaying had to be Dale Earnhardt’s 2000 Talladega Raced Version. That was the car that really fired off my interest in the Raced Version die-casts.

RT :  It’s neat how you collect various Lionel cars, including the Raced Version replicas.  Which of these cars was the first to catch your attention and what do you like about these types of replica cars?

LN :  Dale Earnhardt’s 2000 Talladega Winner was the first Raced Version die-cast that I purchased. The thing that draws me to these version of cars over all the others is the look. There is nothing better than the look of a car covered in tire debris, a doughnut on the side from a hard fought battle, and covered with confetti from a well-deserved celebration.

RT :  As a die-cast collector, you’d have to be innovative with how you display your cars.  Do you have a certain rhyme or reason with how your cars are featured in terms of a theme?

LN :  As for right now, with the type of cases I have for displaying the cars, only Raced Version cars are on display. I have them in driver sections and each driver section is in chronological order of the date of the race they are from.

RT :  Do you prefer a certain scale of Lionel die-cast cars and how many cars do you have in your collection?

LN :  I definitely prefer the 1:24th scale size. The current number of cars in my collection is 374, out of that 250 are raced versions. There are sets and drivers I mostly follow.

I have one of every Dale Earnhardt, Dale Earnhardt Jr., Chase Elliott, Kyle Larson, Brad Keselowski, Tony Stewart, and Stewart-Haas Racing Raced Version die-cast ever produced. Also, living in Texas since 2008, I have every Texas Motor Speedway Raced Version car that has been produced since then.

RT :  Life as a collector can be like a treasure hunt.  That said, which of your current die-cast cars was like obtaining the holy grail of NASCAR replicas?

LN :  I would have to say my most prized car in the collection would be Dale Earnhardt’s 1997 Daytona Crash Elite.

RT :  The Lionel Racing collector’s community seems to be quite tight knit like with the actual sport.  Have you formed friendships because of your passion for die-cast collecting and if so, do you meet your friends at the tracks?

LN :  It surely is a tight knit group of people and there really are a lot of great people that are part of the die-cast collecting group. I have come in contact with quite a few of them and have developed good friendships with a few. I have leaned on more than a couple of them to help me track down hard to find cars I have needed to get to complete certain sets of cars I have been looking to get.

RT :  It’s almost a universal, unspoken rule that one can’t have too many die-cast cars.  Considering this, when you see Lionel offering a specific driver’s car through its various brands or product lines, how important is it for fans to pre-order early to ensure that car is produced?

LN :  I believe it is very important to preorder cars. As it stands right now, I currently have 28 cars that I have preordered.