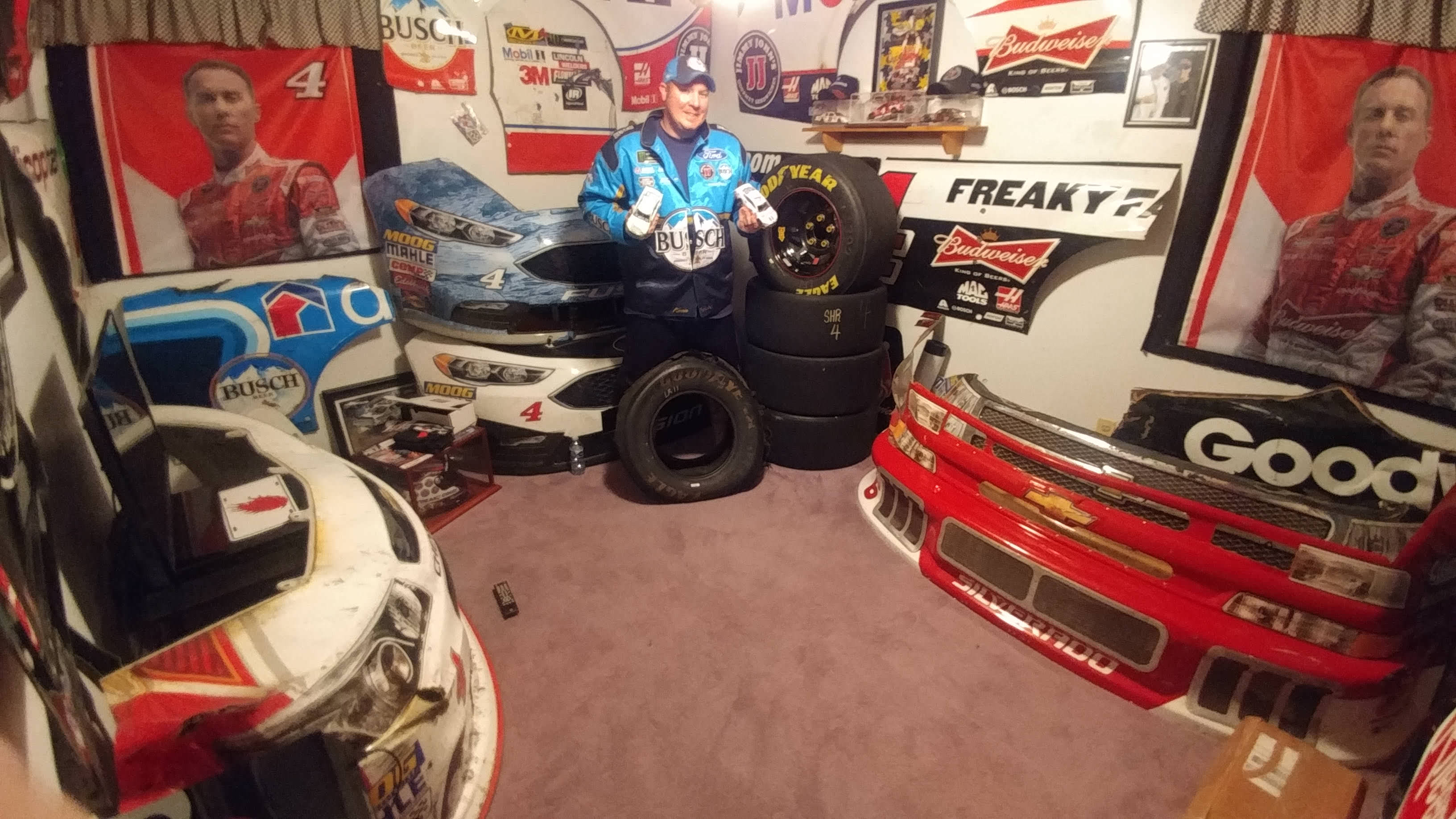 In the world of NASCAR, familial relationships can truly dictate how fans choose their favorite drivers. Whether it’s a selection made to coincide with a familiar on-track rivalry or a personality-based choice, fans can form a remarkable bond with drivers that extend into the realm of die-cast cars.

Chucky Latham of Lexington Park, Md. became a fan of NASCAR but in somewhat unique fashion. Unlike most fans who fell in love with the sport at the sight of their first Goodyear Eagle tire, it was a gradual love affair.

Initially an enthusiast of NHRA drag racing and funny car legend John Force, Latham turned his attention to NASCAR in the early 2000’s. Once he saw Kevin Harvick’s No. 2 AC Delco Chevy Monte Carlo in a then NASCAR Busch Series race, he became a stock car racing fan for life.

Latham chose Harvick for his tenacity, aggressiveness, and workman like approach with getting the job done on the track. Consequently, he’s met his favorite racer and acquired numerous renditions of the 2014 Cup champion’s cars in a collection aptly called “Taj MaHarvick.”

This U.S. Navy civilian firefighter and NASCAR enthusiast is always happy to talk about racing and share his story about his fandom of the sport and die-cast collecting.  As one of the kindest, most approachable fans around, let’s get to know more about Chucky Latham in this latest edition of “Collector’s Corner,” here on Lionel Garage!

Rob Tiongson :  First of all, thank you for your service!  For race fans and readers of LionelGarage.com, tell us a little bit about yourself and how you became a fan of NASCAR.

Chucky Latham :  Firstly, thank you for this amazing opportunity to be featured in The Collector’s Corner.

I am 40 years old and a civilian firefighter of 15 years for the U.S. Navy where I am a Firefighter/E.M.T. I have a total of 25 years in the fire service.

I became a partial NASCAR fan when I was a child. While being a huge John Force fan, I decided to have a little fun with my late father and start watching NASCAR with him just to bring us closer together.

My father was a Dale Earnhardt Sr. fan, so instead of following his driver, I pulled for Bill Elliot when I wasn’t watching NHRA. Pulling for Elliott drove him crazy but that’s what made it fun. We always had a competitive relationship, so it only seemed right to keep that streak going. I didn’t get big and fully blown like I am now into NASCAR until 2000 once I started following Kevin Harvick!

RT :  Each fan’s story with how they bought or acquired their first die-cast car is unique. How did you get your first NASCAR die-cast replica car, and do you recall the first Action/Lionel related car that you collected?

At that time, I had a very big collection of John Force cars and it was out of my element to collect anything but NHRA cars. I’m so glad I did it as it started a passion of collecting that I never saw coming.

RT :  We all know that die-cast collecting can be like trying to find Waldo or beating a video game. Which of your replicas was the most difficult yet satisfying to collect or obtain?

CL :  I would have to say it was my 1996 John Force six-time championship car. Back then, that car plagued me as it was an expensive car back then and of course with no internet, I had to rely on local dealers to locate one which took forever it seemed. But I remember getting it and being so happy to add it to my collection and I’m proud to say I still have it.

RT :  I understand that you have quite the impressive collection that you’ve amassed called “Taj MaHarvick.” When did you first start this collection and how did the concept of having this immaculate set of cars come to being for you?

CL :  My very first Harvick die-cast was his 2001 “Rookie of the Year” No. 29 Chevy Monte Carlo. After that car, it was game on.  I couldn’t get enough.  I was at my local die-cast shop every weekend getting the newest Action/Lionel Harvick car.

And then we got internet and I found eBay.  That one website changed my scope of collecting forever. Before I knew it, I was starting to get into collecting sheet metal, race used tires, confetti, trading cards, firesuits, and other Kevin Harvick items. I share my collection on my Harvick Facebook pages and Twitter.

My friend Janet came up with “The Taj MaHarvick” name after one of my posts and it just stuck. Now my collection contains over 150 die-cast cars and tons of race used items, including the blowout side of his Texas win from last year, pieces off his Sonoma, New Hampshire, 2013 Richmond, and Kansas wins, and numerous noses and other parts that he raced through the years!

RT :  For some fans, they decide on a driver based on their success on the track or their personality, or both in some cases.  What were some of the reasons for you becoming a Kevin Harvick fan?

CL :  It all started in 2000 when I was a very big fan of NHRA and John Force.  For me, it was his personality. He was a very aggressive driver and still is. Harvick was always getting into a scuffle and I liked that. All my life, I pulled for the bad guy for the most part and Kevin was the driver that, for me, fit that persona.

The first time that I saw that blue No. 2 AC Delco Chevy, I was hooked, and I have been a diehard fan ever since.  It’s become so much so, I even have a tattoo that goes shoulder to shoulder on my back. I was sent to Richmond as Jimmy John’s ultimate fan in 2016 and got to hang out with Harvick and his crew all day before the race and watch the race from his pit box alongside my wife and Delana Harvick. That moment right there was a dream come true.

RT :  On average, about how many die-cast cars do you usually purchase or acquire in a trade from a fellow race fan each year?  Do you usually focus on a specific scale like 1/24 or 1/64?

CL :  Mainly, I collect any special paint schemes and all his race wins are a must. Those are the ones I gotta have. And most of the time, I try to get some part of the car to match the die-cast. The detail that Action/Lionel puts in these raced wins are truly amazing. It’s neat to compare the pieces from the actual car to the replica.

RT :  After the hot start that Kevin Harvick enjoyed this year, is it safe to say that you’ve considered or have pre-ordered all three of his Raced Version winning replicas?

CL :  That is already taken care of.  am a very happy and proud Harvick fan and I don’t let any raced wins slip by.

RT :  Die-cast collectors can agree that there’s no such thing as having too many die-cast cars.  That said, what’s the most elusive car that you’ve wanted in your collection?

CL :  I would have to say the car I really want in my collection would have to be one that’s not out yet. Out of all the cars I have and have had, I never was lucky enough to receive a prototype. My dream car would be the Texas win ELITE prototype. That race means a lot to me as it was the first race I watched with my parents from flag to flag where he won. The last race I watched flag to flag was the 2001 Daytona 500 and we all know how horrible that turned out. So to have that prototype would be amazing!  That would be the holy grail in my collection.