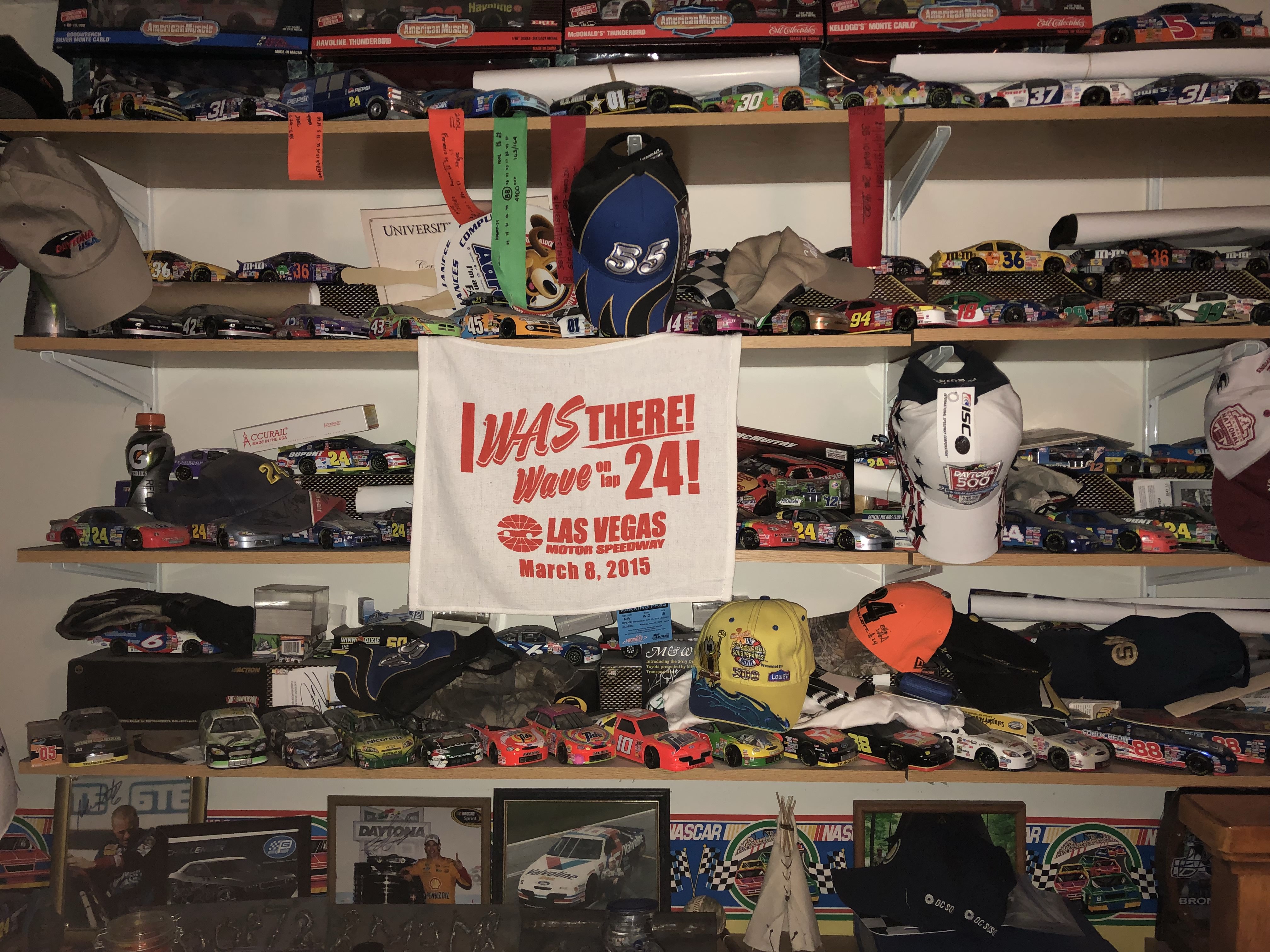 If there’s one striking similarity between die-cast collectors and their cars, it’s that collectors are a diverse bunch. Some focus on either a single driver or team, while others amass a pride of replicas resembling a die-cast hall of fame.  As illustrated in prior “Collector’s Corner” posts, some collectors are passionate about a single legendary racer, while others host stop motion races with different scales of replica cars.

While Adam Oelrichs may not stage stop motion events, much like the collectors we’ve profiled already this season, his initiation into the sport was driven by family.

More than just a fan and collector, Oelrichs serves as a member of Michigan International Speedway’s advisory board for young NASCAR supporters.  Naturally, he’s had the opportunity to experience stock car racing through a variety of perspectives through the Youth Fan Advisory Board.

Recently, I caught up with Oelrichs to talk about his introduction into NASCAR, his first impressions of the sport, and his preference for Lionel Racing die-cast cars.  Despite being one of the younger die-cast collectors that we’ve profiled, his attention to older cars as well as an upcoming NASCAR Classics replica shows his respect for this unique sport’s past.  Without further ado, let’s get up to speed and in the “Collector’s Corner with Adam Oelrichs” here on Lionel Garage!

Rob Tiongson :  First, for the readers here on Lionel Garage, tell us a bit about yourself and how you became a race fan. Was it an instant connection for you with NASCAR?

Adam Oelrichs :  I am a member of the Youth Fan Advisory Board for Michigan International Speedway.   I live in Sterling, Illinois. I am 19 years old. I am attending college and my major is Animal Science. My parents are huge NASCAR fans and it was a natural fit for me to become one also.

RT :  What was the first race that you attended and your initial takeaways from it that still stand out to this day?

AO :  The first race I attended was an ARCA race at Chicagoland Speedway. I was three years old and I don’t remember much about it. My parents made the decision that when I said I was ready to go we would leave. My dad figured I would make it about 20 laps and be ready to go. I watched 90 laps due to the fact they told me Frank Kimmel’s car was Jeff Gordon’s, who happened to be my favorite driver.

RT :  Like most race fans, you collect die-cast cars. When you attend races, or when you read about the latest releases or offerings from Lionel Racing, would you say that you collect these cars immediately and keep an eye on what’ll be on the way throughout the year?

AO :  I watch what will be released like the Darlington throwback paint schemes. I like that they honor and pay respect to the roots of NASCAR.

RT :  What was your first NASCAR die-cast car, and do you still have it in your collection?

RT :  Do you collect a specific scale of these die-cast cars?  How do you display them in your house?

AO :  Most of my cars are 1:24 scale and I have shelves in my room that they are displayed on.

RT :  Now I understand that you are part of Michigan International Speedway’s Youth Fan Advisory Board.  How did that opportunity come about for you and what are some of the things that you enjoy with being part of this group?

AO :  I applied when they formed the board and was one of the first eight members chosen. We walk with the manufacturers’ flags during driver introductions. We have done tours of the various series’ garages. Also, I toured the MRN broadcast trailer. I’ve gone up to the spotter’s stand and met team spotters. Also, I’ve had the opportunity to meet other kids around my age that are NASCAR fans.

RT :  As a Jeff Gordon fan, while he isn’t a full-time NASCAR racer anymore, Lionel plans to release the 1998 Darlington and Atlanta race winners. Are these two cars that you plan to collect and are you planning to get both scales and any of the special finishes?

RT :  Die-cast collecting can be much like scavenger hunting, whether it’s going by car to a store or looking online for that next prized car. Which car was the most difficult to obtain, but one that you currently consider as your “Holy Grail” NASCAR replica?

AO :  I’d have to say Dale Earnhardt’s Wheaties ride and Jeff Gordon’s Chroma Premier from the Clash at Daytona, both cars from 1997.

RT :  The NASCAR world is such a neat community in that there’s longtime fans who integrate with the newer ones, be it online or at the track. Would you say that the die-cast collecting community is the same and have you met any collectors in recent years at Michigan or other racing venues?

AO :  The independent vendors share the same love of the sport that I do. They are willing to help you find whatever car you want. Most of the vendors travel the race circuit and when I go to tracks other than Michigan I see the same vendors at those races.

RT :  Being a die-cast collector, how important is it for fans to pre-order in advance to ensure their favorite driver’s car meets the minimum needed to produce?

AO :  I think it is important to pre-order because that insures you get the cars you want. Sometimes it is hard to find high demand cars at the track.