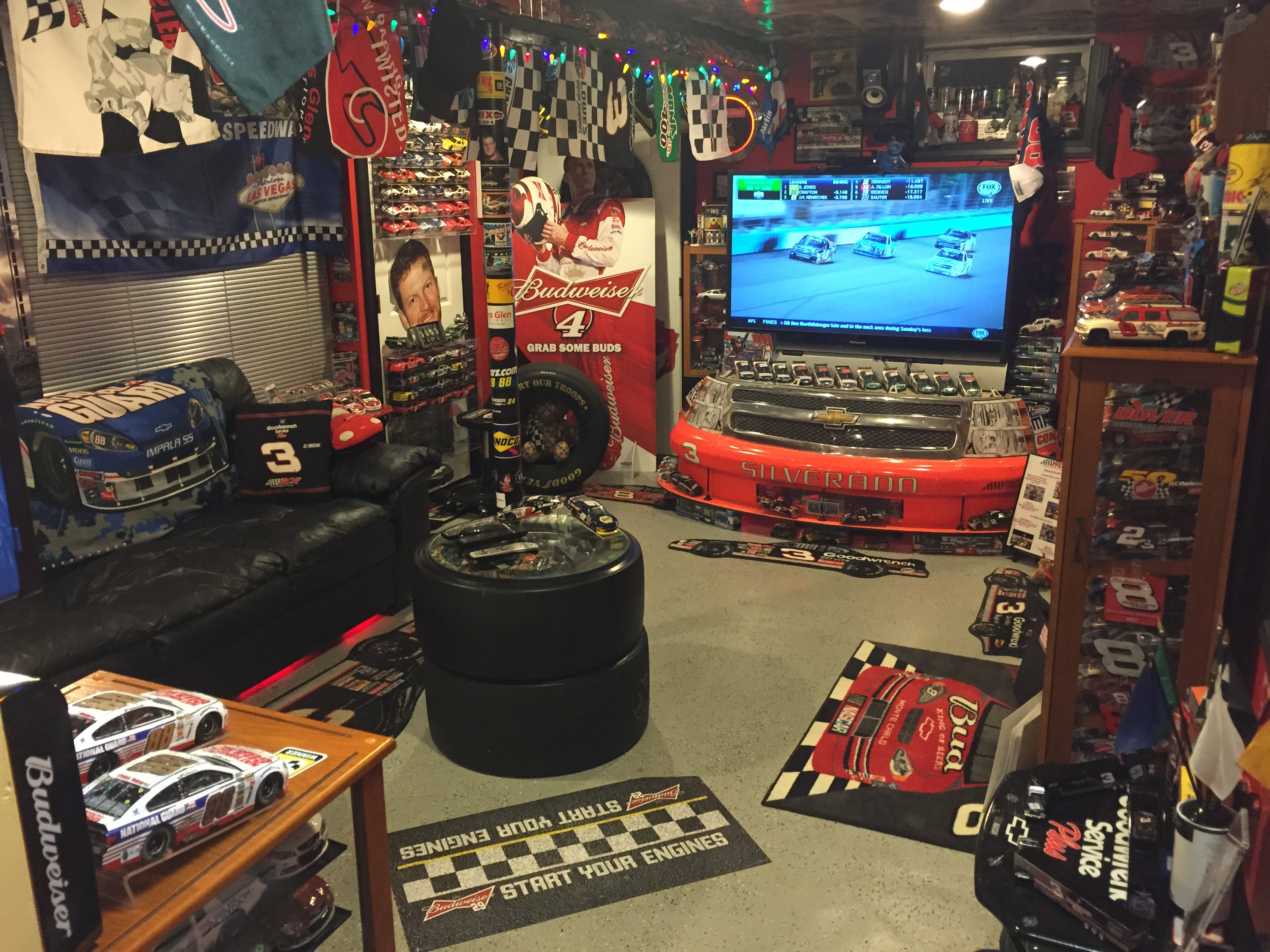 Die-cast collectors, much like any sports fans who collect sports trading cards, have a unique story to share that coincides with a special moment.  From a special occasion on the field, or in this case, a race track, to sentimental memories with family or friends, a collector’s item can spawn a wonderful, healthy hobby that lasts through the years.

In the case of Glenn Zabransky of New Jersey, his interest in NASCAR stemmed from his family, namely his father and grandfather.  Attending events in the Northeast, Zabransky caught the racing bug at an early age.  Making yearly pilgrimages to Dover starting in 1996, the 32-year-old Garden State native combined his passion for NASCAR with die-cast collecting.

Over the years, Zabransky’s collection has grown so much that he’s needed a fan cave to display most of his prized replicas.  It doesn’t take much to replicate that experience of being at a track, a race team’s shop, and a local racer’s garage with Zabransky’s die-cast room.

This Lionel Racing enthusiast does more than showcase his prized replicas on social media.  In fact, he gives away duplicate cars to younger fans or enthusiasts struggling to find that replica in their local stores.

For a collector who appreciates the sport and hobby, Zabransky is one of the friendliest fans around on social media or at a local NASCAR track!  Without further ado, let’s get to it by getting in the “Collector’s Corner with Glenn Zabransky” here on Lionel Garage!

Rob Tiongson :  For our Lionel Garage readers, talk a bit about how yourself, how you became a NASCAR fan, and the first race that you attended.

Glenn Zabransky :  I became a NASCAR fan the way many do - from their parents or relatives.  My father and grandfather were race fans and they would go to local races in the Northeast. Naturally, that was passed down to myself.

In 1992, my dad took me to my first NASCR race at Pocono. Darrell Waltrip won the race.  We started going yearly until 1995 when we switched to Dover. I’ve been to every fall Cup race at Dover, in the same seats, since 1996.

RT :  How did your collection start and was there a specific driver or team that you collected?

GZ :  A lot of the early collection of 1/24 scales were my dad’s and I worked my way into them as I got older and could afford them. We have a lot of those early cars in 1/64 because my father would order a small one for me of every 1/24 he ordered.

I remember getting the catalogs all the time and waiting for the Thursday Thunder deals that Action used to have.  My die-cast “obsession” started when I was four or five when I would get the Racing Champions “Collector Sets” from BJ’s or K-Mart.  Those sets had 1/24, 1/64, and a driver’s transporter.

My old man was a diehard Sr. fan.  Being a fan of “The Man in Black,” a lot of our cars were Dale Sr, although the collection truly started with a set of 1/24 scale Richard Petty cars from Franklin Mint.  In 1996 at Phoenix, my dad joined the Racing Collectables Club of America (RCCA) and the rest was history.

RT :  What’s one of your fondest or memorable moment of attaining a driver’s autograph on one of your prized replicas?

GZ :  Honestly, I really only got into autographs and signatures in the last few years as I started camping at Pocono and Dover.  I’ve met a ton of drivers in that time and got a bunch of autographs.

The Dillon brothers are my favorite to run into and get stuff signed. Ty and Austin take time to sign for fans at an event or in between sessions.  I got my 2014 Ty Dillon Brickyard/First Win signed at Pocono last year and my 2013 Austin Dillon Eldora Win signed as well.

Ty signed it right after he was bumped from second round qualifying at Pocono. My wife and I sat on the wall with his father for most of the session. Even after a disappointing qualifying effort, he took the time to sign for me and a few others.

RT :  How important are those first die-cast, particularly those that are sold in retail or track in 1/64 scale?

GZ :  Those first cars that a young fan gets can shape their fandom for years to come.  I was lucky enough to attend a ton of races and have a dad that also collected. But being able to again, especially with Lionel Racing’s Authentics line, and go to your local Target, Walmart, Toys ‘R Us, or what have you, - purchasing that NASCAR die-cast is awesome.

Kids could see that, grab one or want one, and perhaps get their parents to tune in one weekend so that they can see it in action or vice versa. A kid could be exposed to NASCAR and want the toy of the car that they saw on Sunday.  The exposure of the die-cast to the retail marketplace is great for the die-cast community.

RT :  What’s some of your favorite qualities with Lionel Racing’s products and what are some of the cars that you look forward to pre-ordering or purchasing this year?

GZ :  I’ve become a huge fan of the Raced Version cars. When I started collecting, they used to be few and far between, not made from every weekend. But now that they are, they are some of my favorite for sure. The dirt and the grime on some of them are awesome looking. The details on the rims, with the weights and the scuffs, are super cool details that really set it apart. And who doesn’t love confetti? The 2016 Jimmie Johnson Homestead winner was a super cool car as it was grimed up and covered in confetti.

RT :  How neat is it for you to meet others who share the same passion or story with how they first got into this hobby?

GZ :  This is my favorite question.  As most of us know, NASCAR is kind of the dark horse in major sports. While loads of people like it, it doesn’t seem to be as mainstream or common as baseball or football.

To have a group of die hard fans that not only enjoy the sport, but the collecting aspect of die-cast is just awesome.  I’m a member of multiple Facebook groups for collecting and follow many of the same people on Twitter and Instagram.

I started an IG page for my collection a few years ago and have really gotten into it. I love sharing die-cast and other memorabilia I’ve acquired with others.  I received a good amount of cards and promotional items from sponsors and teams.

While I love to share it, I’ll give some away to share with other fans.  Getting a signed card, hat or die cast that a young kid might not be able to get somewhere else is a great feeling.  I’m glad I’ve had the opportunity to do it a couple times now.

I get a lot of messages from younger collectors wanting to know how I have so many cars or where I get them all from. I always tell them, “Give it time, the hobby isn’t going anywhere. The ‘ride’ is the best part! The stories and memories you get from the collection will last forever, so don’t rush it!