Die-Cast Collecting Across the USA 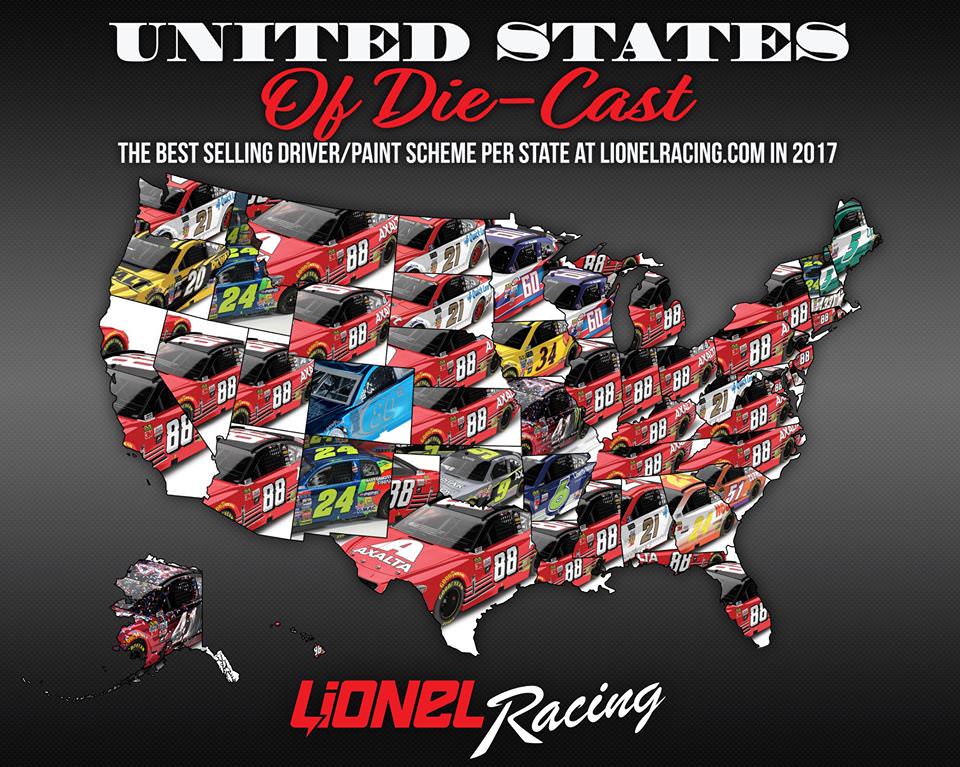 When it comes to sports fans who purchase collectables, NASCAR enthusiasts bask in the hobby of collecting die-cast replicas.  In the case of race fans across the country, it was more like the United States of Die-Cast in 2017.

Naturally, Dale Earnhardt Jr fans made their presence known throughout the nation.  Based on last year’s sales for Elite die-cast cars made through LionelRacing.com and the RCCA Call Center, Earnhardt’s No. 88 Axalta “Last Ride” Chevrolet SS paint scheme was the top-selling die-cast car in 26 states.

Undoubtedly, Earnhardt’s throwback paint scheme, paying homage to his distinctive paint scheme during the 1999 Cup season, won the popular vote in grand fashion.  Furthermore, it was the best-selling die-cast replica made in Lionel Racing’s history.

Undeniably, homefield advantage is a term that’s prevalent in stick and ball sports.  However, it can also apply in the world of die-cast collecting.

For example, Chase Elliott’s No. 24 Hooters Chevrolet SS was the collector’s choice in Georgia.  After all, it was a paint scheme that combined history and the excitement of the youth movement.

Certainly, Landon Cassill, NASCAR’s champion with Twitter and social media, saw his No. 34 Love’s Ford Fusion adored by his fellow Iowans.  At the same time, former Kulwicki Driver Development Driver Ty Majeski and his No. 60 iRacing Ford Mustang was a smash for collectors in Wisconsin and Minnesota.

On the other hand, homefield advantage was not a factor for various NASCAR racers and their collectable counterparts.  For instance, Matt Kenseth’s No. 20 DeWalt Toyota Camry was the bestselling die-cast car in Oregon. Surprisingly, the native of Cambridge, WI would seem to have quite the strong following in this Pacific Northwest state.

Additionally, Cody Ware’s No. 51 Clemson University Chevrolet SS was the die-cast of choice in South Carolina.  Sure, Ware may not hail from the Palmetto State, but the unique orange and purple colors of the famed academic institution resonated for die-cast collectors in grand fashion.

Nostalgia was quite strong in a trio of unlikely states for the recently retired Jeff Gordon.  Lionel Racing’s replica of Gordon’s 1997 Daytona 500 winning No. 24 DuPont Chevy Monte Carlo was the top-selling replica for ardent collectors residing in Idaho, New Mexico, and Vermont.

Social media specialist and sophomore sensation Ryan Blaney struck a chord with fans in Washington, North and South Dakota, Alabama, West Virginia.  His unmistakable, Pocono winning No. 21 Motorcraft Ford Fusion replicated a special moment that may signal the beginning of this racer’s status as a fan favorite.

New England die-cast collectors seemed to be filled with Kasey Kahne fans, as his No. 5 UniFirst Chevrolet SS spoke volumes for those in New Hampshire and Maine.  Meanwhile, the Bay State’s Kaz Grala made a “wicked good” impression with his No. 33 Daytona winning Kiklos Greek Olive Oil Chevrolet Silverado.

Kurt Busch’s scuffed up, grass adorned 2017 Daytona 500 winning No. 41 Haas/Monster Energy Ford Fusion won the hearts of Alaskans and Missourians.  With scratches, dents, and a replicated piece of sod on the hood, this unique replica was historical in that it represented the first stock car to win a points-paying race in the Monster Energy NASCAR Cup Series era.

Last year’s NASCAR Xfinity Series champion William Byron was Oklahoma’s favorite with his No. 9 Axalta Chevrolet Camaro.  The primarily gray and black base colors, accentuated by the neon yellow numerals, may have been visually appearing on the track as it was in die-cast form.

Richard Petty’s last Cup race was in Atlanta of 1992 but that didn’t stop Colorado collectors from fantasizing about “The King” being in a stock car again.  In honor of Petty’s milestone birthday last year, Lionel’s ICON No. 80 Ford Fusion was as pristine and sterling as the career of this NASCAR legend.

Lastly, Trevor Bayne’s No. 6 Liberty National Ford Fusion prevailed in Arkansas.  At first, it may come as a surprise.  Upon reflection, collectors in this state are likely supporting the ride most associated with Mark Martin.

Whether your passion for racing stems for a driver from your home state or their unique paint schemes, it’s quite evident that NASCAR and Lionel Racing enthusiasts are everywhere in the colorful United States of Die-Cast.

By Rob TiongsonContributor to Lionel Garage