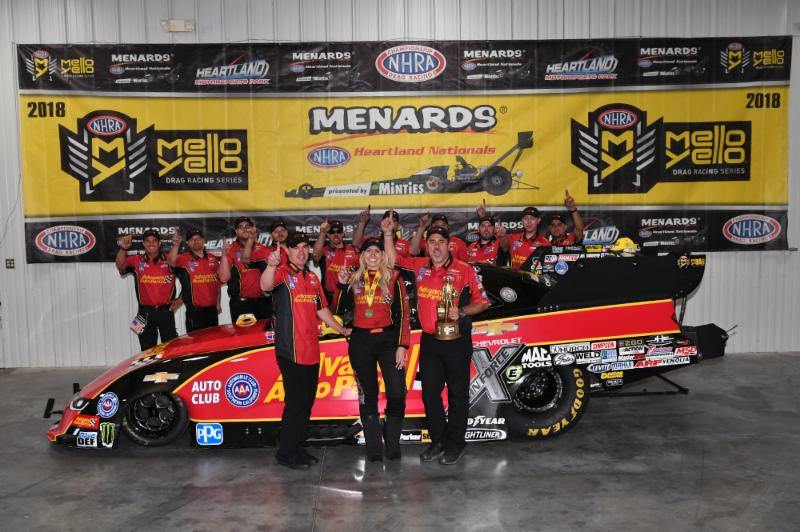 For most collectors, die-cast race cars are sought after because they are a memento from their favorite driver or team.  And Courtney Force, one of the leading stars in the NHRA Mello Yello Funny Car division, is no different.

Notably, Force’s season has been off to a tremendous start with three wins so far at Phoenix, Atlanta, and Topeka.  As of press time, she leads the Funny Car division points standings.

An 11-time winner in the Funny Car division and a perennial title contender, Force’s cars have been immortalized by Lionel Racing during her stellar career. From her rookie ride in 2012 to her current Advance Auto Parts Camaro available for pre-order, fans can be like Force and collect one of the hottest and fastest race cars around.

Recently, I caught up with Force to talk about her season to date, her racing journey, and die-cast car collecting. Get up to speed with this talented racer in this first edition of “Die-Cast Talk”!

Rob Tiongson:  It’s been a terrific start to the year for you and your John Force Racing team as you won your second race of the season, this time coming at Atlanta. With two wins and the points lead after seven events, how excited are you about your team’s strong performances and your outlook on the championship?

Courtney Force:  Our Advance Auto Parts team’s extremely thrilled. We’ve had a good start winning in Phoenix and then going out there winning this past week at Atlanta Dragway. It’s been a great start for us. I think we’ve got a pretty good racecar and I’m very fortunate to have the team that I have and my crew chiefs, Brian Corradi and Dan Hood, working on my car.

We’ve found a little bit of consistency and we think that’s great. I’m feeling confident, especially now that we’ve just taken over the points lead. We have high hopes, for sure, that we can go out there and hopefully get that championship by the end of the year. But, it’s still going to be a long season. We’re just going to do the best job that we can to stay at the top.

RT:  When you think about your journey in the NHRA, particularly in this class of cars, does it sometimes feel like a blur in terms of your growth professionally and personally?

CF:  I think it’s a little surreal to think of how far we’ve all come.  I got my start back in 2012 in Funny Car but I started racing at the age of 16 in Super Comp dragster and Top Alcohol dragster.  It’s crazy.  I’ve learned a lot along the way and I’ve worked with a lot of great crew chiefs and teams and to have the support of so many sponsors.

To think that I’ve got 10 career wins now, we’ve had multiple number one qualifiers, we’ve broken records … it’s been very surreal.  But, it’s been a lot of fun and it’s due to all of the people that I have around me and all the guys that are working on the racecar.

RT:  Social media has been instrumental with the growth of most racing series, particularly with the interaction between drivers and fans. How important has it been for you to interact with fans on platforms like Facebook and Twitter to engage them with a unique racing series like the NHRA?

CF:  It’s huge. The one thing that my dad always taught us was to go out there and be with the fans.  The fans are the reason why we’re out here doing what we love.  If we don’t have that support, then we’re not going to be out here racing forever.

That’s what we’ve found with social media.  Social media gives us an immediate way to connect with the fans. They’re able to have conversations with us and respond to our posts. And we respond back.

I think it’s great. I think a lot of fans connect with that. And we have them coming up to us at the racetrack and talking about our posts and how they love it.

RT:  Most drivers have their welcome to racing moment that’s made them feel welcomed in their profession. For you, when you saw your first Lionel Racing die-cast car, what was your feeling when you saw your car immortalized as a replica and do you collect some of your cars?

CF:   I definitely have a collection of die-cast cars at home. From my rookie season car to everything in between, those are very special to me because those are the cars that I ran on track and have a lot of memories in.

Some I’ve taken to the winner’s circle. I think it’s amazing to have that as a memory that I can put into my office and always remember that special paint scheme or a special car that we did so much and had a lot of highlights with my career. But I think it’s great for fans too because it’s something they can collect as well.

RT:  What would you say has been your favorite paint scheme so far in your career?

CF:  To be honest, I always like when we’re able to do the pink Funny Car. We did it last year for the month of October for Breast Cancer Awareness month. Those ones are probably my favorite because they have such a strong message in trying to bring awareness.  I have a lot of fans that come up to me and are really thankful when we do a car like that.  That one is always a special one.