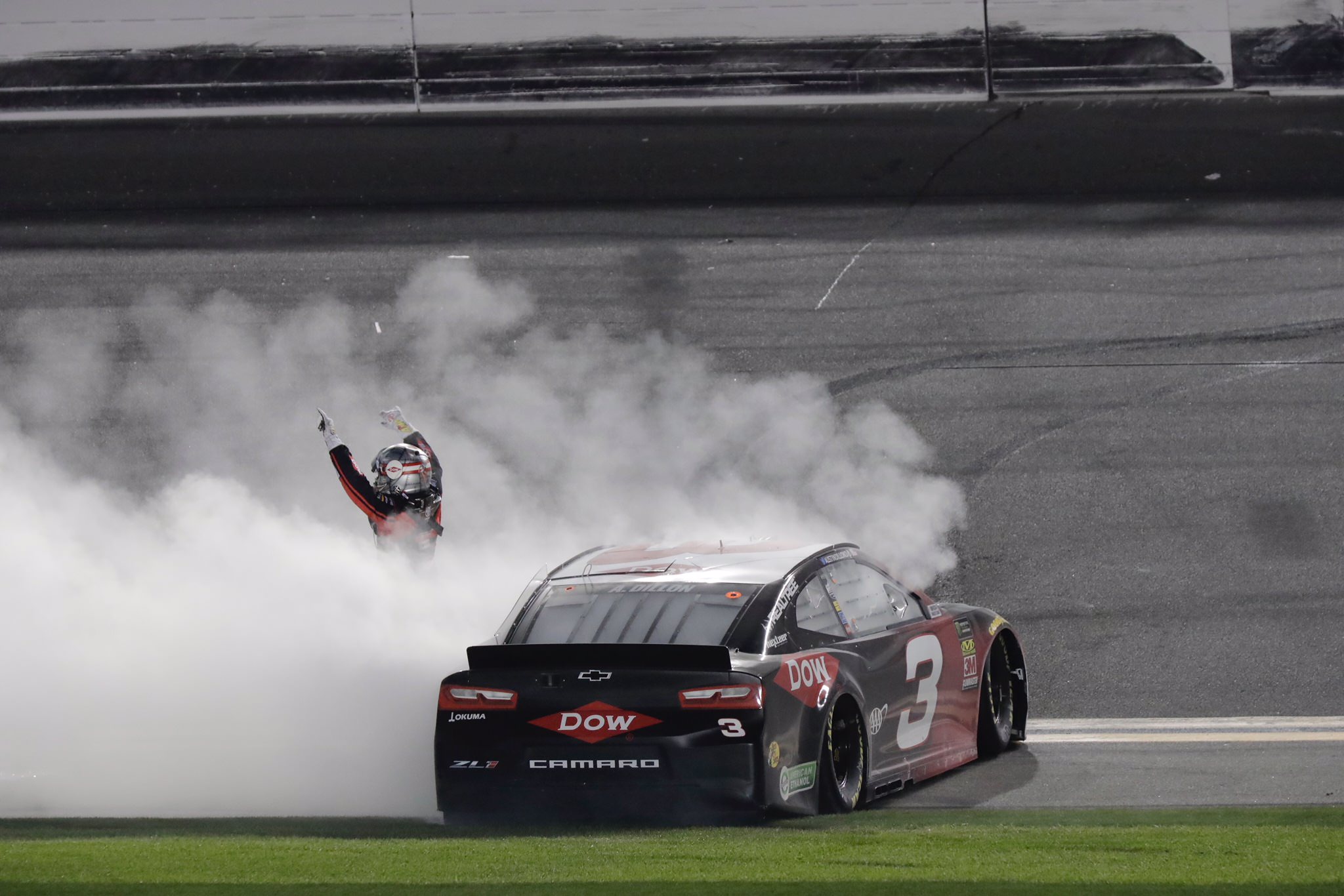 In a memorable Daytona 500 that produced 24 lead changes among 14 drivers, Austin Dillon won the season opener in dramatic style.

Despite leading one lap in the competitive but grueling season opener, it was the most important of the “Great American Race.”

Starting towards the rear of the field in a backup ride, Dillon methodically worked his way up to ninth. By lap 120, the North Carolinian found himself running second on the final lap.

As the field raced towards the backstretch, Almirola attempted to hold onto the lead but was bumped by Dillon’s No. 3 Dow Chevy Camaro.  The contact proved to be the race winning move, as the 27-year-old brought the historical No. 3 back to Daytona’s Victory Lane.

“It’s so awesome to take the No. 3 car back to Victory Lane,” Dillon said.  “This one’s for Dale Earnhardt Sr and all those Sr fans.”

Like Earnhardt in 1998, Dillon received a lucky penny from a race fan who he met in the infield prior to the 500.  Coincidence or not, lady luck was with Dillon and his Richard Childress Racing team.

More importantly, Dillon, with his first Daytona 500 victory, punched his ticket into the 2018 NASCAR playoff field.

Although Daytona Speedweeks has concluded, Lionel Racing will be offering Austin Dillon’s winning car in five different options!  Dillon’s No. 3 Chevy will be available as a Raced Version die-cast in 1/24 and 1/64 scale, catering to fans with varying budgets or tastes!

Collectors who enjoy die-cast cars of a smaller variety can pre-order the ARC Raced Version 1/64 scale car, which will feature highly detailed race markings and confetti!  This replica, perfect for display cases or mini Daytona 500s, will be offered at an MSRP of $7.99.

While the race winning car will be on display at the Motorsports Hall of Fame of America, Lionel Racing will offer Dillon’s ride as a 1/24 ARC Collector’s model at an MSRP of $54.99.  In addition to the battle scars prevalent on this winning ride, this ARC model will feature an opening hood, closed trunk, posable wheels, die-cast body, opening roof flaps, and painted, plastic chassis.

Race fans will have the opportunity to pre-order Dillon’s No. 3 Camaro in ELITE form in three color options!  The Standard Color Raced Version will be offered at an MSRP $84.99 while the Galaxy Color edition can be pre-ordered at an MSRP of $89.99.  For those looking to duplicate the under the lights condition at Daytona, the Color Chrome ELITE will be available at an MSRP of $99.99!

For die-hard collectors with an attention to detail, the ELITE model comes with an opening hood and trunk, poseable Goodyear tires, fully die-cast body and chassis, upgraded engine details, and a detailed chassis!

Get your hands on Austin Dillon’s victorious Camaro by pre-ordering online at LionelRacing.com or by calling 1-800-952-0708, where a call center representative will happily assist you, Monday through Friday between 9:00 a.m. to 6:00 p.m. ET.

by Rob TiongsonContributor to Lionel Garage