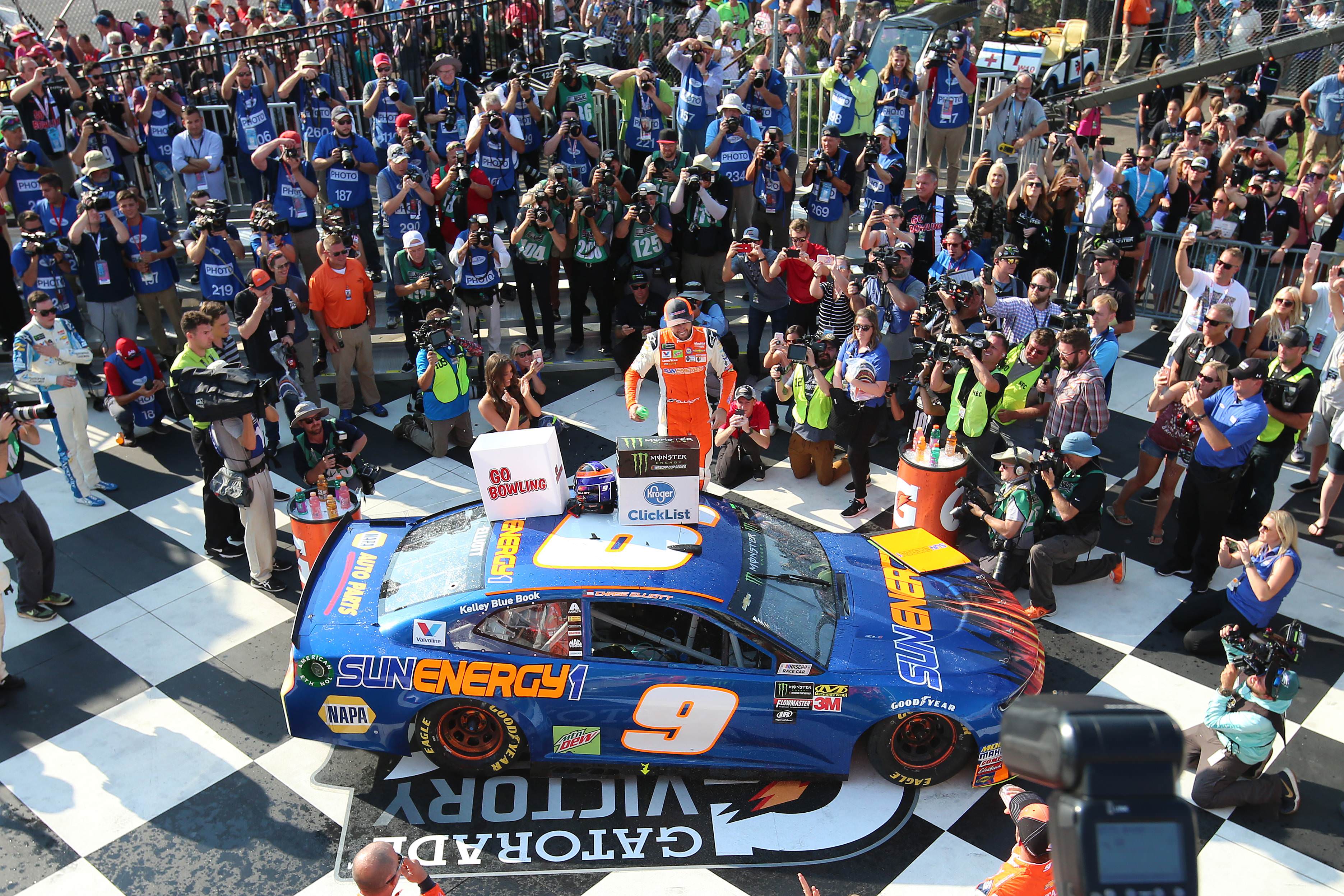 After 98 starts with eight oh-so-close runner-up finishes in the NASCAR Cup Series, Chase Elliott finally broke through at Watkins Glen International.  Indeed, the Dawsonville Pool Hall finally got to ring the siren as one of their proud sons won a Cup race for the first time since 2003.

With a fast and unmistakable No. 9 SunEnergy1 Blue Chevrolet Camaro off the hauler, Elliott started third and overcame a 19th place finish in Stage 1 of the GoBowling at the Glen.  Earning an exciting win in Stage 2, Elliott found himself in a tenacious dogfight with defending series champion Martin Truex Jr in the final segment.

Like an action or thriller film, Elliott and Truex were relentless with each other, waiting it out to see who’d crack first in the last laps.  On the final circuit around the 2.45-mile road course, Elliott was faced with having to make a tough split-second decision to stave off Truex.

“I was starting to wheel hop and I knocked it out of gear to not spin out,” Elliott recalled. “I had a big enough gap (on Truex).”

As the duo headed toward the Inner Loop, Truex’s car began to sputter.  Ultimately, Elliott put some daylight between himself and the tenacious Toyota racer, pulling away.

In a year that’s been somewhat frustrating for the Chevrolet race teams, Elliott felt joy and elation as he got the proverbial monkey off his back on this race day.

"Holy cow!” Elliott exclaimed.  “What a thrill. I don't know what to say. I'm so thrilled. So much relief. Worked on it for three years. I was able to get it done!"

While one of NASCAR’s most popular racers celebrates his monumental first Cup win, race fans can commemorate this moment with a die-cast of Elliott’s winning ride in a variety of finishes by Lionel Racing.  Collectors can pre-order a 1:64 version of the winning ride for $7.99 as well as the standard 1:24-scale Action Racing Collectables model at $54.99.

However, for those wanting something extra special, at just $69.99 Elliott’s ride is available in a Color Chrome edition, replicating that bright shine that was prevalent in Watkins Glen, NY.

Meanwhile, members of the Racing Collectables Club of America (RCCA) and fans of ELITE die-cast will have the opportunity to pre-order Elliott’s victorious car in five different paint finishes.  Fans can showcase a shiny, glistening version of the winning Camaro in either Liquid Color or Flashcoat style for $89.99.

For those who enjoy that “starry” finish, Elliott’s car can be pre-ordered as a Galaxy Color finish at $89.99.  Lastly, for that ragged, untouched look that speaks to the gritty, fearless fans in collector’s hearts, a Raw edition is up for pre-order at $99.99.

Be sure to get your hands on this special ride, complete with race damage and the scuffs that adorned Elliott’s No. 9 Chevy at Watkins Glen.  Race on over to LionelRacing.com or call 1-800-952-0708 to collect what’s sure to be one of the hottest replicas of the race season!