It's a Bristol Sweep Set for Kyle Busch! 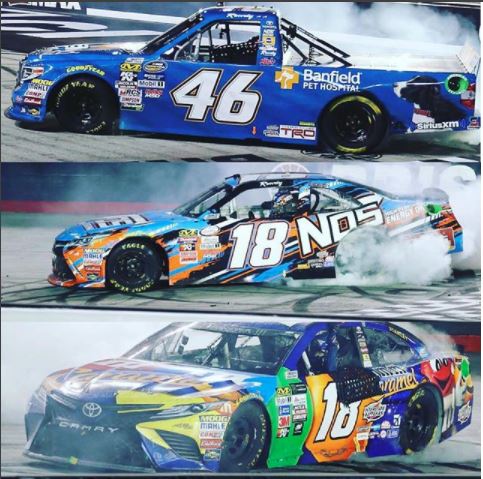 For the second time in NASCAR® history, Kyle Busch eclipsed the competition at Bristol Motor Speedway powering to a win in all three of the sport’s top series on the same weekend: the NASCAR Camping World Truck Series™, the NASCAR XINIFTY Series™ and the Monster Energy NASCAR Cup Series™.

The M&M’s® Caramel die-cast will feature an opening hood and trunk, the NOS Energy Drink die-cast will be built with an opening hood, and the Banfield® Pet Hospital truck will feature a hardtop body. Because each of these die-cast is a "Race Win" version, they will be deco'd with replica race damage and debris giving Rowdy Nation three incredibly authentic replica die-cast. The set will also come with a small bag of real Victory Lane confetti from the Bristol Motor Speedway Cup Series race and each die-cast in the set will come with a collector card that that features race stats and the story of each win.

This Bristol Sweep Set will ship in custom, commemorative packaging and will come with a small resin broom to celebrate the second Bristol sweep in Busch’s record-breaking career.

The NASCAR XFINITY Series Win™ Toyota and the NASCAR Camping World Truck Series™ win truck will not be sold anywhere else.

The set can be pre-ordered now at www.LionelRacing.com or through an authorized onliner retailer.