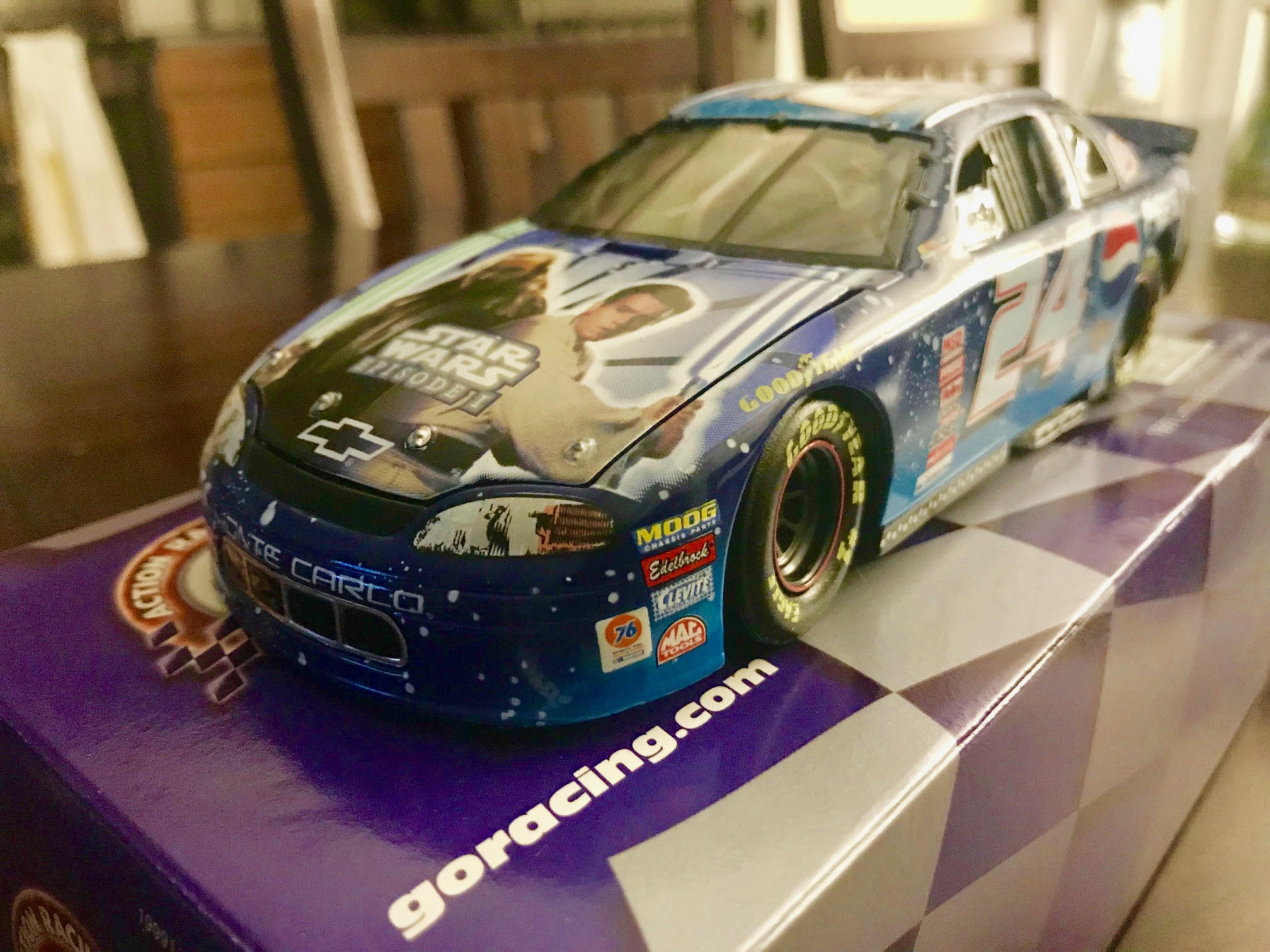 One of the No. 24 Jeff Gordon die-cast in the writer's collection.

The old saying that “things happen for a reason” could not be truer with how I got into NASCAR.  All things considered, if it had not been for some die-cast cars that I collected during my childhood, it’s possible that I’d not know anything about the sport.

With every story, there’s a beginning that connects the puzzle pieces together.  In the summer of 1991, a quick visit to a neighborhood toy store in Medford, Mass. changed my life.

When my family and I went to the store, I usually got a generic Hot Wheels car.  There was no rhyme nor reason with my cars except it had to be visually appealing and look fast.

On August 16, 1991, my mom spotted a brightly colored race car with a red "21" on the doors and roof.  Unlike those Hot Wheels, this car had the word “CITGO” on its sides and hood.

Enthusiastically, I asked my mom to get that diecast car and she acquiesced.  Little did I know that my life was about to change.

Two days later, we were in the living room, channel surfing while trying to keep cool in our small apartment.  Much like that fateful trip to the toy store, a certain race caught my eye.

When my dad changed the channel to ESPN, I asked him to keep it on the race.  Coincidentally, it was the waning moments of the Champion Spark Plug 400 at Michigan International Speedway.

This closing laps of this race were riveting as Davey Allison tried his best to keep Dale Jarrett at bay.  Not to be denied, Jarrett willed his car to the stripe as the winner, besting Allison by only eight inches.

Surely enough, the die-cast car that my mom bought for me on that Friday was Jarrett’s No. 21 CITGO Ford Thunderbird.

Call it destiny or serendipity.  In either case, NASCAR became a part of my life, a tradition that’s stayed with me from a young fan to an aspiring journalist.

Sadly, I don’t have that diecast car in my collection, as I gave it to my cousin during my adolescence.  If there’s a regret in my life, it’s giving away my first connection to NASCAR.

Today, I collect die-cast cars in 1:64 scale.  Most of those cars happen to be from the Action Racing Collectables line, dating back to 1997, including a Jeff Gordon “Million Dollar Date” replica and Gordon’s No. 24 Pepsi “Star Wars: Episode I” ride from 1999.

Die-cast cars are like time capsules that can be displayed with pride and happiness.  One look and I’m brought back to a moment in time without needing Marty McFly and Dr. Emmitt Brown to bring back the kid in me.

In this case, I am thankful that my parents bought a die-cast car that became the tapestry of my place in NASCAR.  As a writer, be it on Lionel Garage or The Podium Finish, I owe it to my parents, and that die-cast car, for bringing the world of NASCAR into my life.

By Rob Tiongson
Contributor to the Lionel Garage