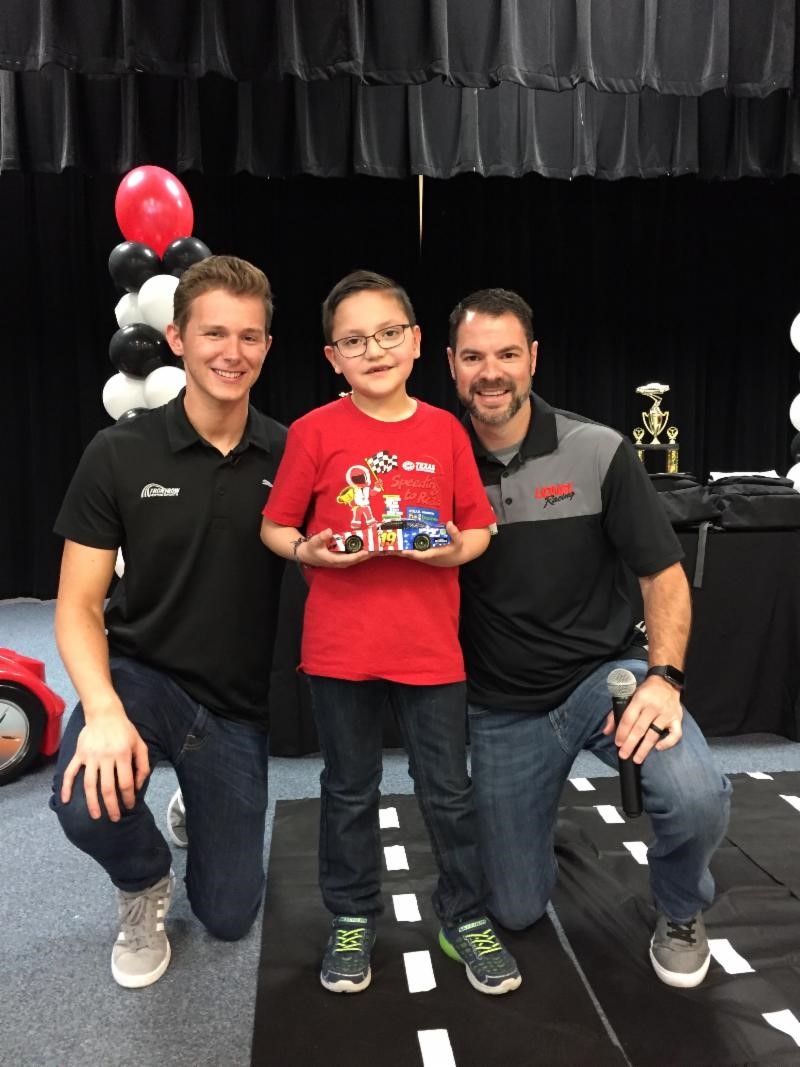 Matt Tifft spent his day Thursday impacting more than 1,100 students between two Dallas/Fort Worth elementary schools that was highlighted by the crowning of the winners of the Lionel Racing "Design A Die-Cast" contest among the 14 elementary schools and 7,549 students participating in Texas Motor Speedway's Speeding To Read program.

Tifft, driver of the No. 36 Surface Sunscreen/Tunity Ford Mustang for Front Row Motorsports, opened the morning in fashion with his first stop coming at the home of the defending "Design-a-Diecast" champions, Diamond Hill Elementary (FWISD) in Fort Worth. He was treated to a cheerleader-and-bucket-drum-line escort followed by a raucous welcome at the elementary school entrance.

Tifft and Lionel Racing's Director of E-Commerce Thomas DeBoyace presented to the Overall Winner and Kindergarten-2nd Grade Champion, second-grader Ivan Herrera. He surprised Herrera with a Lionel Racing 1:24-scale die-cast featuring his paint scheme that was a tribute to the United States.

As Principal Marlyn Martinez read his winning essay before announcing his name, Herrera could barely hold in his smile. Watching people run the American flag up the school flagpole every morning inspired his patriotic design. He also wrote, "Readers are Leaders" on the hood of the car and explained his decision.

"It says 'Readers are Leaders' because reading makes you smart," Herrera said. "We are in this earth to help others."

Then it was off to Carrollton's Homestead Elementary to present the winning diecast to the 3rd-5th Grade Division champion. Tifft also received a rousing welcome at Homestead, receiving rounds of applause when informing students that he's a big Fortnite fan and is engaged to be married.

His main message, though, was to let kids at both schools, though, know that this competition and his own backstory are proof of what we're all able to accomplish.

"I worked hard academically and in racing to get to this point," Tifft said. "For anybody, no matter what their dream is, keep reading, keep studying hard, and just do anything you can to go after your dream."

He and DeBoyace then presented fifth-grader Anebelle Ung with her die-cast showcasing her winning blue-gray camo paint scheme.

"He got his own diecast car now. I had to wait until I was in NASCAR to get mine," Tifft laughing while discussing overall winner Ivan Herrera's diecast.