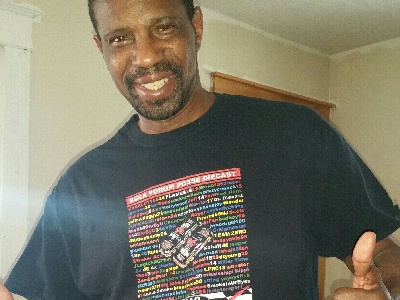 This is how I got started in collecting:
First of all I've always been a fan of Tony Stewart. And even before the '79 showing of the Daytona 500 I enjoyed Nascar, (only before then...

This is how I got started in collecting:
First of all I've always been a fan of Tony Stewart. And even before the '79 showing of the Daytona 500 I enjoyed Nascar, (only before then i didn't realize it.) One Saturday I was doing some work. I takes a break. Two stores down from where I was working there was a hobby shop. So I ventures in and out see some diecast cars; Jeff Gordon, the Biff, etc. Also was a few Tony Stewart cars. And because I was already a Stewart fan I wanted a car. But I didn't know which to buy. They were Pontiacs from his early years at JGR. Sense Father's Day was coming up in figured this would be a good gift for me. I told my ex about the store, what I wanted, and whatever the decision was would be the car i'd have.
My first diecast was 1999 Tony Stewart Habitat for Humanity arc with rookie stripes. Needless to say I was "hooked". I wanted another car. I think my next car, (which I bought) was '98 Shell Oil arc. When I ordered Tony's '09 Office Depot arc of knew I found the enjoyment of this hobby. Then I discovered the elite cars. Soon thereafter I joined RCCA. I never looked back nor regretted anything.
Admittedly I'm a total collector of my driver. I have at least one of every finish that's been produced for Tony Stewart. Some finishes were less than appealing, and I'm glad they were discontinued. Others I miss because they were real beauties. And there are some paint schemes that were only done in standard of it wish were made in either CC or Liquid. These are the cars I'm hunting to add to my collection.
Since Tony has retired there are still dnp protos that I'm ISO that I dearly desire. That's my goal now.
I went from wall mounted plexiglass cases to wall mounted custom wooden cases to furniture display cabinets. For me the hobby doesn't stop.
I've really grown and my enjoyment has grown equally. I hope TS cars are produced that got dnp'd in previous years. Or historical series cars are made.
Tony Stewart for life. I'm with Smoke. Period.